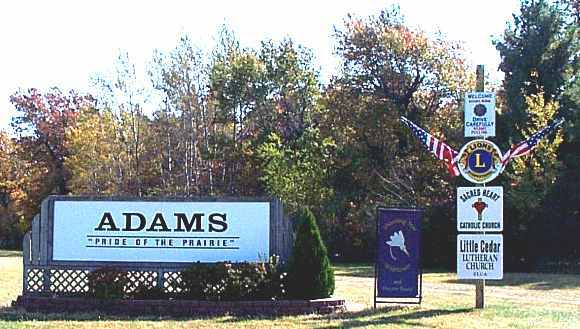 Adams, MN is a vibrant community of 800 people on the prairie just 5 miles north of the Minnesota-Iowa state line and about 15 miles southeast of Austin, MN in Mower County. Adams, is located about 30 miles southwest of Rochester, MN and 100 miles south of Minneapolis-St.Paul.

This site is a growing collection of information of organizations, businesses and people that make up Adams, MN. Adams is on the Shooting Star Scenic Byway (MN Hwy 56 mile post 1-30) with its accompanying 20+ mile bicycle & hiking trail, the Shooting Star Recreational Trail, which mostly follows the abondoned railroad tracks adjacent to Hwy 56. Slow down and enjoy the vestiges of the native tall-grass prairie flowers, grasses, and herbs the pioneers encountered a hundred years ago when they settled in this area.

Adams is one of four cities cooperating in an unusual joint-powers multi-community entity called Prairie Visions. This organization has been very active in encouraging the construction of the recreational trail, the scenic byway designation and in conversation of the area native flora and fauna.

The village of Adams was platted on January 30, 1868 by Selah Chamberlain. A two-room public school was built in 1869 and was later expanded to four rooms. The village was officially incorporated on March 2, 1887. A water works system was installed in the summer of 1897. A volunteer fire department was established as Adams Hose Co. No. 1 in 1898. A sewage system was installed in 1902. A Catholic school was built in 1903 and roughly half of the public school students started attending there, greatly relieving overcrowding. The sewage system was updated in 1958. The town is in the Southland school district (which includes Southland High School), and is home to the varsity fields for the teams.

Points of Interest of Adams, MN

Visit our county page and you will find information about our town and county's points of interest, festivals/events and faith community. You also will learn about the community organizations that have built and continue to build strong communities (chambers, community groups, and departments, etc) and much more when you visit the Mower County, MN page.