Cherryvale was founded on the land of the Osage Indians who were pushed out by veterans of the American Civil War looking for land. The first white man to purchase property and settle here was Mr. Abe Eaton, who later sold it to the Kansas City, Lawrence & Southern Kansas Railroad which then became the Leavenworth, Lawrence & Galveston Railway. The town site was platted by the railroad in 1871. It was named Cherryvale from its position in the valley of Cherry Creek.

Between 1871 and 1873, at least eleven people vanished in the vicinity of an inn and general store operated by the Bender family about eight miles northeast of Cherryvale. Following the disappearance of the Benders in 1873, it was discovered that they had apparently murdered a number of travelers. Between eight and eleven bodies were discovered buried on the premises. Governor Thomas A. Osborn offered a reward of $2,000 for the apprehension of the Benders, but they were never found.

The main part of the town was destroyed by fire in 1873, but was soon rebuilt, and in 1880 Cherryvale became a city of the third and afterwards of the second class. Natural gas was used as a factory fuel and for domestic lighting. Natural Gas was found here in 1889 and then oil several years later.

The city is currently the headquarters for the South Kansas and Oklahoma Railroad, a shortline that runs 511 miles of track in Kansas and Oklahoma. The railroad, owned by WATCO, painted SD-40-2 4158, in the High School's colors of Blue & White in 2011, and the unit is stationed at the new yard, completed 2013, north of Cherryvale. 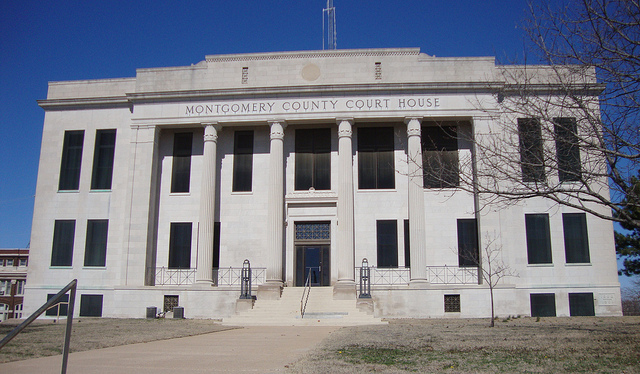 Visit our county page and you will find information about our town and county's points of interest, festivals/events and faith community. You also will learn about the community organizations that have built and continue to build strong communities (chambers, community groups, and departments, etc) and much more when you visit the Montgomery County, KS page.