Humboldt, named after Baron von Humboldt, was founded in 1857. Germans migrating from Hartford, Connecticut, began organizing a colony during the winter of 1856–57. They arrived in Lawrence, Kansas, in March 1857, and at the town site on May 10, 1857. Orlin Thurston, a young attorney, moved to Humboldt during the summer of 1857 and put up a steam sawmill; he began sawing wood and building houses on the prairie side of town. The first frame building was erected by J.A. Coffey; and in May 1858, W.C. O'Brien opened the first gristmill in the county. The United Brethren Denomination erected the first church in 1859.

In 1861 Humboldt was attacked by a collection of border ruffians and Osages led by John Mathews out of Oswego, Kansas who took several recently freed African-Americans back into captivity. The Humboldt Home Guard joined with the Kansas 6th Cavalry under James G. Blunt to counter-attack. In a battle of September 18, 1861 Mathews was killed at Chetopa, Kansas.

The city was organized as a village in 1866 and incorporated as a city of the second class by the act of February 28, 1870. In October 1870 the Leavenworth, Lawrence & Galveston railway was run through Humboldt; the railway is currently a short line owned by BNSF Railway.

Humboldt was the Allen county seat for seven years, from 1858 until 1865, when Iola became the seat. Humboldt won two contentious legislative elections to become the seat in 1858 and 1860, but another election in 1865 at the end of the American Civil War resulted in the re-location of the county seat to Iola. The legitimacy of this election was questioned by Humboldt residents due to low turnout arising from soldiers fighting the War. Some residents claim that the county seat was "stolen". Iola effectively secured the seat by donating 100 lots to the county to aid in the construction of public buildings and subsequently raising funds to build a courthouse. However, Humboldt was also guilty of shady practices. Lieut. Col. Charles W. Blair, the commander of Fort Scott, temporarily replaced the commander of the post at Humboldt, Maj. Henry C. Haas, to keep the soldiers there from illegally voting in the county seat election. Blair claimed none of the troops were legal voters in Humboldt. The Humboldt newspaper, however, denied the troops had been involved in any wrongdoing. County seat wars of this sort were common in Kansas and the American West.

Humboldt was very much involved in the American Civil War. The town was raided September 1, 1861, by Confederate raiders, who took much property and kidnapped eight free blacks, who may have been placed into slavery. Several persons may have been wounded by gunfire, but no one was killed. Many of the raiders were hunted down and one of the leaders, Col. John Mathews, was killed.

Actions were taken to prevent Humboldt coming under further attack. Two home guard companies were organized in the Humboldt area. These militia units sought to protect the town and to scout as far south as the Kansas-Indian Territory border to prevent Confederates from coming too close to town. Some of the militia was involved with the pursuit of the September raiders. Two Humboldt area structures, O'Brien's Mill and W. W. Curdy dry goods store, were fortified.

Amazingly, Humboldt fell victim to another raid on October 14, 1861, 1 1/2 months after the first raid. The second raid caught the town totally off guard and the 100 home guards surrendered when they discovered they could not protect the town from the 330 raiders. O'Brien's Mill and most of the town was burned. The W. W. Curdy store apparently was spared, but it played no further role in Humboldt's defenses. It was said the second raid was at least in part revenge for the killing of Mathews and for the actions of U.S. Senator James H. Lane and his brigade's sacking and destruction of Osceola, Missouri.

After the second raid the threats to Humboldt's safety were taken very seriously. At times the town had local militia units operating and most of the rest of the Civil War the town had Army troops stationed there. Sometimes the military post there was called Post Humboldt. A blockhouse was partially constructed at 514 S. 3rd Street. This was used by the local militia as its headquarters and as a recruiting office.

Other points in town were used by the military. The German settlers in town built a church on Bridge Street, in the east part of town. This was used as the post's quartermaster store and was run by a sergeant. On the west side of town, a number of cabins were built on the east side of the Neosho River. This was sometimes called Log Town, but was more commonly known as Camp Hunter. When the ranks swelled beyond the capacity of the cabins, tents were pitched at the camp. Of the places used by the military, home guards and militia, today only the German church stands and it was converted into a private residence in the 1950s.

In October 1864, the area was threatened by a huge raid through Missouri and eastern Kansas. The Confederate raiders were commanded by Maj. Gen. Sterling Price and most of the troops and militia went to meet the threat further east. Also, in the same time period Maj. Haas, in command of the troops, and Maj. Watson Stewart, in command of the militia had differences of opinion as to the extent of the jurisdiction of Haas. Haas wanted control of the militia and Stewart contested this. The militia maintained its independence, but no until Haas managed to arrest one of the militia's officers.

The post at Humboldt was manned by troops at least through June 1865. It probably lasted into July and very possibly into August. When troops abandoned the town, the use of the military buildings came to an end, as well. 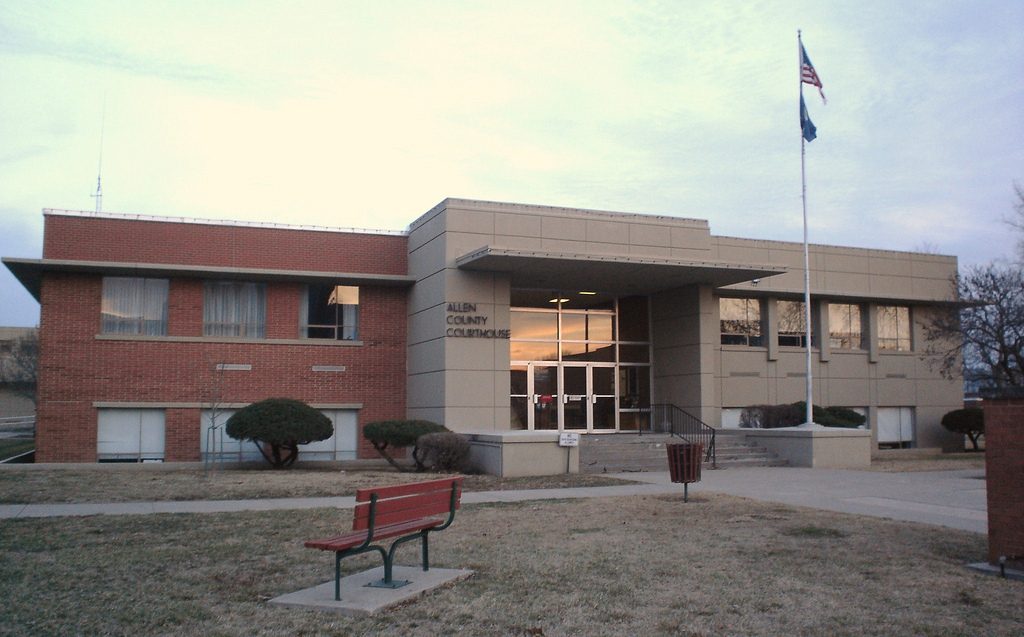 Visit our county page and you will find information about our town and county's points of interest, festivals/events and faith community. You also will learn about the community organizations that have built and continue to build strong communities (chambers, community groups, and departments, etc) and much more when you visit the Allen County, KS page.