John Pittsenbarger was the first European settler when he set up a tent in town in 1856. His application to name the town Petersburg was rejected because there was already a town of that name in Boone County, Missouri. According to local legend, the United States Postmaster General submitted his name. The Postmaster General at the time was Horatio King, (although the local history refers to Rufus King.

The town became a stop on the St. Joseph and Des Moines Railway in 1878. The railway eventually became part of the Burlington Northern network and is currently abandoned.

In the first half of the 20th century, King City was the heart of a Kentucky bluegrass seed harvesting region stretching from Kearney, Missouri through King City to Maitland, Missouri, which claimed to harvest more bluegrass seeds than the entire state of Kentucky with King City resident John Weller claiming to be the "King of Blue Grass Raisers.". Bluegrass seed production moved to the farming areas of the Pacific Northwest in the 1950s.

In the 1990s, the Big Pump, a 25-foot (7.6 m) high building resembling an electric gasoline pump, was moved from Maryville, Missouri to King City. It is on the National Register of Historic Places. Rufus Limpp, an oil jobber who built the station, is from King City (the Limpp Community Lake by King City is also named for him). The Big Pump is located on the Tri-County Museum grounds.

King City has only one grocery store, McCrea's, a family operated business started by Dean and Virginia McCrea. They have owned the store for more than 50 years, and Mr. McCrea still works there every day.

One prominent former King Citian was celebrated children's author Clyde Robert Bulla, who died in 2007 while living in Warrensburg, Missouri.

The Opera Hall Block was listed on the National Register of Historic Places in 2002. 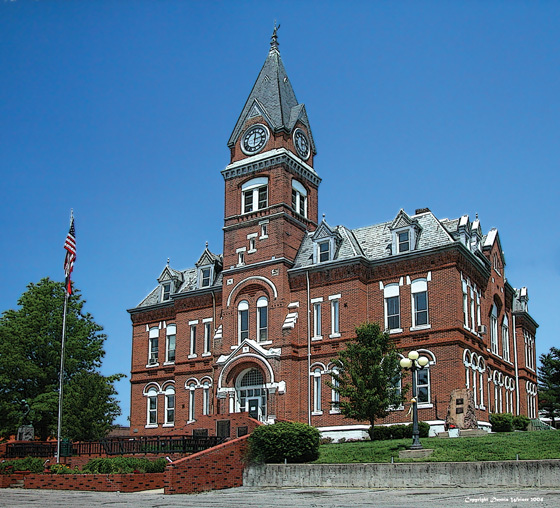 Visit our county page and you will find information about our town and county's points of interest, festivals/events and faith community. You also will learn about the community organizations that have built and continue to build strong communities (chambers, community groups, and departments, etc) and much more when you visit the Gentry County, MO page.