Freedom is a term that may be defined in more than one way, depending upon the source of the definition. One succinctly stated definition provided by a Martin County resident is as follows: “To me, freedom is doing what we ought to do – what is right, not what we want to do.” That quote came from a member of a Martin County family that included thirty-six cousins having served in World War II.

Those cousins can be traced back to 1885 when Carl and Louise Nolte moved to Martin County from Downers Grove, Illinois. They bought 200 acres of land west of Fairmont and raised twelve children, including a set of identical twin boys.

All of those that served during World War II were sons, sons-in-law, or grandsons of the twelve children of Carl and Louise Nolte.

With that many relatives serving in the military at the same time, one might think that their paths would eventually cross at some point, as was the case with Paul Nolte. He was stationed in Naples, Italy, and while walking down the street one day he encountered Elmer Haertel who was on leave after landing on Anzio Beach. Paul Nolte was also stationed in Rio de Janeiro, Durban, South Africa, and the Suez.

Another Nolte, Earl, joined the military at age eighteen. He served in the 1st Cavalry Division of the 7th Cavalry Regiment, General George Armstrong Custer’s regiment. He handled heavy weapons and machine guns. He was quoted as follows: “We had horses until we went overseas,” he said. “I think they expected us to carry as much as a horse.” He was wounded twice in different campaigns and was sent home by the time he was twenty-one. Earl Nolte also served as the first World War II commander of the Lee C. Prentice American Legion Post 36 in Fairmont.

Herb Haertel, also a cousin, joined the Army in 1941 serving for four years and eight months. He was a clerk in the air corps in the states before being sent to Okinawa in 1945.

Gordon Oltman of Fairmont served in the Navy in both the Atlantic and Pacific. He experienced having his ship torpedoed out from under him twice. The first time he was in the North Atlantic and wasn’t injured but spent about four hours in the frigid water before being rescued. After the second sinking where he said he “hardly got his feet wet,” he was sent to the Pacific. He was aboard what were called Liberty Ships that carried cargo and were not known for their sturdy construction.

Vern Nolte served in the Navy as a pilot from 1941 to 1945. He flew from an aircraft carrier. Some of the places he visited in raids or in support of landings included Wake Island, Baker Island, Tarawa, Kwajalein, Truk, New Guinea, Saipan, and Guam. In addition, Nolte participated in the “Mariana’s Turkey Shoot” in which about 360 Japanese planes were shot down. The ship and air group also participated in the first Philippine Sea Battle which basically destroyed the remaining Japanese fleet.

Mark Nolte, Vern Nolte’s brother, served in the Marines as a Navy doctor. He was the physician that signed the death certificate of Ernie Pyle, the then nationally known war correspondent that wrote about the average American soldier’s daily life in the military while at war. Pyle was killed instantly by Japanese machine-gun fire.

Truman native, Loren Wessel, joined the Army in 1942. He was sent from Fort Roberts in California to Port Adelaide, Australia, to join “D” Company, 128th Infantry, 32nd Division. He went to Papua, New Guinea, as a machine gunner to help Australian forces clear the island of the Japanese enemy. This campaign was a crushing defeat for the Japanese Army. Loren Wessel’s faith and love of God helped him survive the trauma of World War II in the South Pacific Theater during some of the bloodiest fighting of the war.

Walter Wessel, although not in combat, served in the military and was headed to India on a ship when the war ended.

Reinhardt Wessel entered the Army in 1944 and was assigned to the 56th Armored Infantry Battalion of the 12th Armored Division as part of General Patton’s Third Army. His unit advanced rapidly through Germany taking many German prisoners. The Germans used horses for transportation at that time, and Wessel would frequently unhitch the German horses so that they were free to run off. He was hit by shrapnel and was flown to a hospital in France to recover. His decorations included the Combat Infantry Badge, the Purple Heart, and the Bronze Star.

Freedom is what the aforementioned cousins fought for and helped to preserve. Dictionary.com defines freedom as the state of being free or at liberty rather than in confinement or under physical restraint. However, perhaps the quote at the beginning of this article, “To me, freedom is doing what we ought to do – what is right, not what we want to do,” that can be attributed to one of the Nolte cousins, Earl Nolte, more precisely defines the true meaning of “freedom.” That’s a powerful message in but a very few words!

For more information on this topic, or to become a member, visit the Pioneer Museum in Fairmont or its website, www.fairmont.org/mchs. 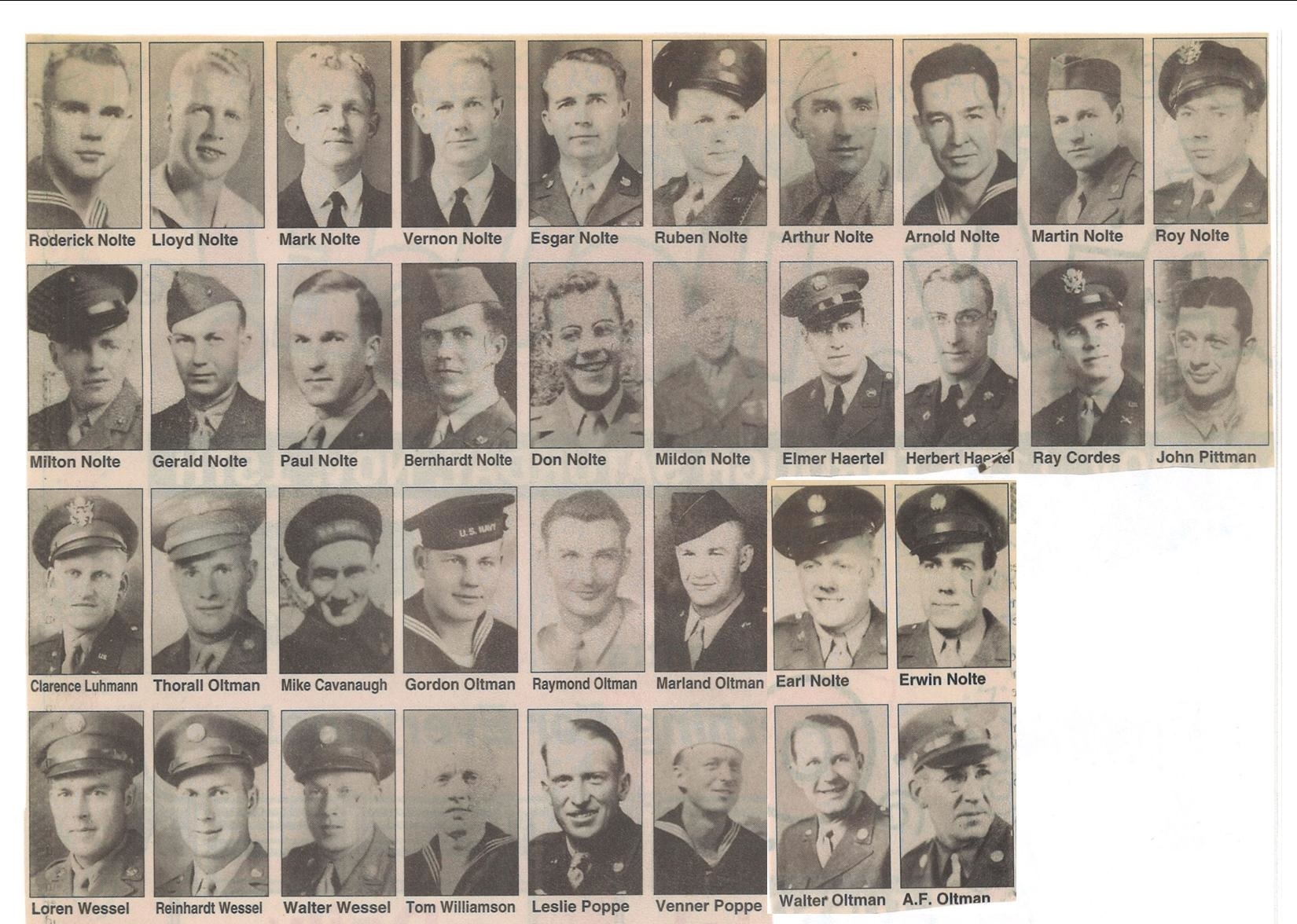