Buffalo County is located within the unglaciated, Driftless Area of Western Wisconsin. Pepin and Eau Claire Counties form the northern border of the county, while Trempealeau County forms the eastern border. Three rivers also border the county; the Chippewa on the west, the Mississippi on the south and east and the Trempealeau on the lower eastern border. All of Buffalo County drains into the Mississippi River.

There are 22 named and unnamed lakes in the county; all small and shallow totaling 358 acres. Of the named lakes, Mirror Lake in Mondovi is the largest with 44 acres. One-half of the lakes have maximum depths of less than 5 feet.

There are 8,390 acres of water and 73 miles of trout streams in the county. All or part of 15 streams are classified as trout streams and are stocked with brook or brown trout. Trout habitat in most Buffalo County streams is marginal due to silt or sand-covered stream bottoms. Some natural reproduction occurs, but trout populations are largely maintained by stocking adult-sized fish.

Some of the larger, warm-water streams, which flow into the Mississippi, contain northern pike, walleye, bass, sunfish, and other sport fish species as well as rough fish. The Mississippi River and its backwaters provide an extensive and varied fishery resource including a commercial fishery.

Early Settlements
The first permanent settlement of Buffalo County occurred in 1839 at Fountain City, which was formerly called Holmes' Landing after a family who traded with the Sioux and Chippewa Indian Tribes. Over the next few years many German, Swiss and Norwegian homesteaders settled in the county, attracted by the County's lumber industry, good soils, abundant water and excellent pasture land. In 1848, Twelve Mile Bluff, now called Alma, was established.

At the time Twelve Mile Bluff / Alma was settled, the county possessed limited timber resources, but was caught up in the middle of the logging boom which was centered in the Chippewa Valley, an area of over 10,000 miles of dense hardwood and coniferous forest. Logs were rafted down the Chippewa and Buffalo (formerly Beef) Rivers to mills which had sprung up all along the Mississippi River. Two of these sawmills, 1 built at Buffalo City in 1857, and 1 in Alma in 1865, provided another source of local employment.

Agricultural development in the county began in the early 1850's, mainly in the valleys or up on open ridges. The land was relatively easy to break at the time since portions of the county were natural prairies or oak openings. Poor roads and a lack of adequate transportation though forced most farmers to settle close to the shipping routes along the Mississippi River. Before the railroads came in the 1880s, practically all grain was shipped out on Mississippi River steamboats. This all changed though with the completion of the Winona, Alma and Northern Rail, and by 1890 grain was shipped almost entirely by rail. 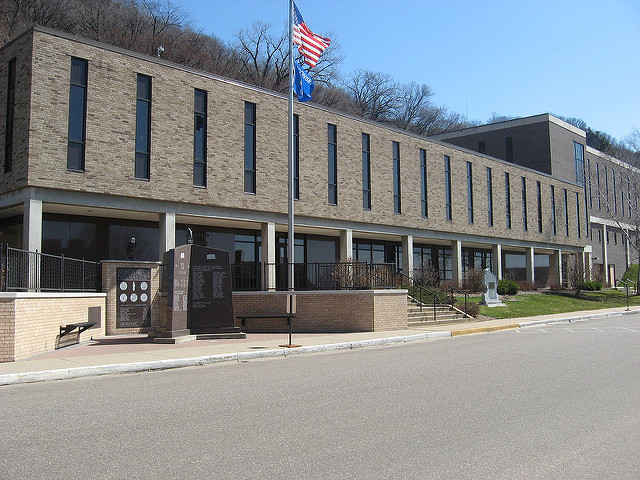