Prior to 1849, Yellow Medicine County, was under federal jurisdiction and was officially known as a part of Wisconsin Territory.  At this time the territory was mostly inhabited by the Chippewa Tribe to the north and Dakota Tribe to the south.  In 1849, Yellow Medicine, became part of Minnesota Territory and was a part of Dakota and Wabasha counties.  According to the treaties of 1850, when tribes of the Sioux surrendered title to their lands in Minnesota, a tract of land ten miles wide on each side of the Minnesota River was reserved as Dakota Territory.  Missionaries quickly moved in after the new Dakota territory was established.  In 1852, Dr. Thomas Williamson, a medical missionary with the Presbyterian Church, established the Pejuhatazizi Mission.  "Pejuhatazizi" is a Dakota name meaning "Yellow Medicine", the name of a plant used by the Dakota for medicinal purposes.  In 1854, Stephen R. Riggs, another Presbyterian, established the Hazel Creek Mission.  These two missions were located about five miles south of Granite Falls in what is now Minnesota Falls Township.  The government established the Upper Sioux Agency in 1854 in what is now Sioux Agency Township.  During the Sioux Uprising of 1862, the Agency, missions, and several white settlements were destroyed and as a result of the uprising the Dakota lands were declared forfeit.  Consequently, white settlement began again in 1865.  At this time Yellow Medicine was a part of Redwood County, MN.  The early settlers were largely Scandinavian and German with smaller concentrations of English, Irish, Czech, and Bohemian.

Yellow Medicine County was created by a legislative act on March 6, 1871.  board of three commissioners met on January 1, 1872 in Yellow Medicine City, which became the first county seat.  In the spring of 1874, Granite Falls became the county seat and the first courthouse, containing a court room and three small offices was completed on the site of the present jail.  Then in 1888, this building was replaced with a two story stone structure which still acts as the court house today on Ninth Avenue in Granite Falls.  Twenty-one townships and ten communities were established in the new county between 1871 and 1890.  The communities include Granite Falls, Canby, Clarkfield, Wood Lake, Echo, Hanley Falls, Porter, Hazel Run, St. Leo, and Burr.  A Dakota settlement of about 150 people is located three miles south of Granite Falls.  Each community is authentic and has its own rich history to portray to their visitors.

Yellow Medicine County has an area of 758 square miles.It is 54 miles long from east to west and from 12 miles north and south at the west end to 21 miles at the eastern boundary.  The elevation of the county ranges from 1,739 feet near the southwest corner of the county to 860 feet where the Minnesota River flows out of the county.  The mean elevation is 1,165 feet above sea level.  The soil for the most part is good black prairie till.  Underlying the glacial drift, which covers the entire county, is an irregular layer of igneous gneiss rock which crops out along the Minnesota River in the east end.  The average mean temperature is about 45 degrees; the average rainfall is 25.13 inches; the average snowfall 41.2 inches.  The land is well watered and drained by the Minnesota River and its tributaries; the Lac Qui Parle and Yellow Medicine rivers. 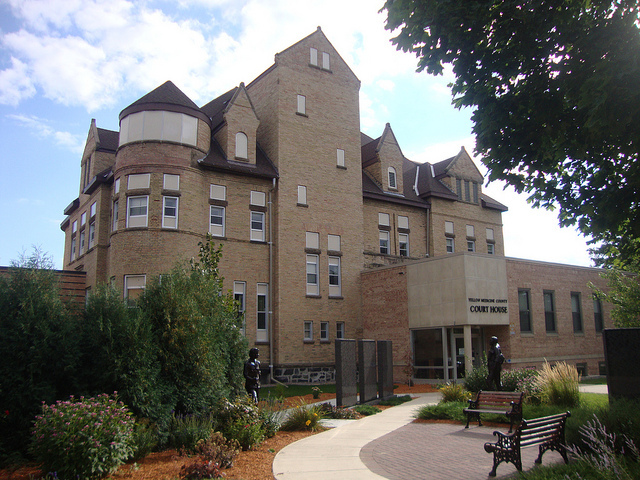