The first settlement in Buena Vista County was at Sioux Rapids on the Little Sioux River. A trading post for trappers and Indians for furs, tobacco, liquor and supplies, it was the location of the first flour and timber mills. A stage road from Fort Dodge to Sioux City passed through.

On Jan. 15, 1851, the name and legal boundaries of Buena Vista County were established with 16 townships. The name was taken from the Battle of Buena Vista in Mexico won by General Taylor's American forces against General Santa Anna.

Buena Vista County was part of Woodbury County for voting and judicial activities until 1856. Sioux Rapids was the only town. A three man committee, designated by Judge A.W. Hubbard, selected Prairieville, (1 mile south of Sioux Rapids and later called Leesville) as the county seat. In 1858 an official county government was elected and organized.

In 1869 there were 242 county residents. The county was too remote and too small to furnish more than three men to serve in the Civil War in the Union Army upon President Lincoln's call. However, it grew rapidly to 2,000 in 1870.

No town arose at Prairieville, so the first official county business was conducted in the living room of George Struble's log cabin in Sioux Rapids. The next location was a sod house built by Abner Bell, 14'x 14'. The first courthouse was erected in Sioux Rapids in 1870, 26'x 36' and 2 stories high, for $4,945. It had just been finished when a series of battles for the county seat location began. A new railroad had just been laid with Alta, Newell, and Storm Lake along its line. The city of Newell erected a brick building hoping that the county seat would be located there. It was not.

On January 1, 1877, the Sioux Rapids courthouse burned to the ground with all its contents except for a safe and the Board of Supervisor's records. Court was held in a schoolhouse and Newell and Alta gave up their aspirations to support Storm Lake. Storm Lake had constructed a 30'x 36' 2 story city hall. The city offered to lease it for 10 years to the county as a courthouse, if Storm Lake were named the county seat. The offer was accepted in 1878. A committee of Storm Lake residents went to Sioux Rapids, with 2 barrels of apples as a peace offering, to claim the county records. No struggle occurred. In 1888 a new brick courthouse (identical to the current Sac County courthouse) was constructed for $25,000. Construction on the present courthouse was started in 1969, with dedication in 1972, at a total cost of about $1,200,000. 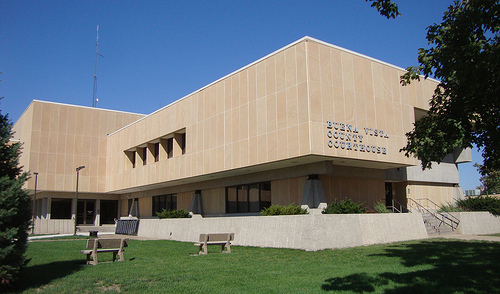