Faribault County was organized as one of Minnesota's territorial counties in 1856. The city of Blue Earth, with a population of 15, was named the temporary county seat by the legislature. That fall 82 residents in the county voted unanimously to leave the county seat in Blue Earth.

Over the years, the location of the county seat has been contested by other communities in the county. However, in 1890, the County Commissioners advertised for bids to build a new courthouse that would settle once and for all, the location of the county seat. The low bid for the project was $42,120. By the time the building was finished in December 1892, the contractor had spent over $70,000.  The architect for the courthouse was C.A. Dunham of Burlington Iowa and the contractor was S.J. Hoban from St. Paul.  The style of the courthouse is Richardsonian (Romanesque).

Stone used in the construction of the courthouse was transported from Kasota MN to Blue Earth by horse & wagon and rail.  Most of the sand used in the mortar was from the Blue Earth river bottom and thoroughly washed.  The pillars on the front of the building are of polished granite.  There are ledges on all four sides of the tower that are of solid stone of unknown weights of several ton each.

The original furniture for the courthouse was bid out in 1892.  Some of the furnishings were sold in 1898 and replaced.  Some of the items sold included desks, wooden planks that were used for walkways, and two outhouses.  One outhouse sold for $15 and the other for $5.

In the early 1900's, drainage became a priority of the County Fathers.  The state gave counties the "power" to work with landowners in constructing, maintaining, and paying for the drainage systems that today make agriculture the number one industry in Faribault County.

In 1925 bids were let for updating the heating of the courthouse.  When the courthouse was built it did have a steam heating system.  But in addition to this several offices had fireplaces.  This explains the several chimneys you see on the roof.  One of the original fireplaces remains in the Treasurer's office.

In 1930 the County Commissioners contracted to repoint and reset the stone and shingles on the tower.  Old mortar on the stone foundation of the courthouse was replaced at this time.

In 1987 the quarry tile floor on the main level of the courthouse was torn up and re-laid.  The subfloor under the tile was composed of river sand, which was reverting back to sand and becoming powdery.  When the contractor tore up the floor to put in a new base they found that in some places only 1/2 inch of the old river sand mortar was still remaining.  There is now 4 inches of relaid concrete under the quarry tile floor.  Before the floor was torn up in 1987 they took pictures so they could re-lay it in the correct and original pattern.  It was during this remodeling that the elevator was installed.

In 2002 the platform that was added to the front steps of the courthouse during the 1960's was removed and the steps were rebuilt closer in the style of the original steps. 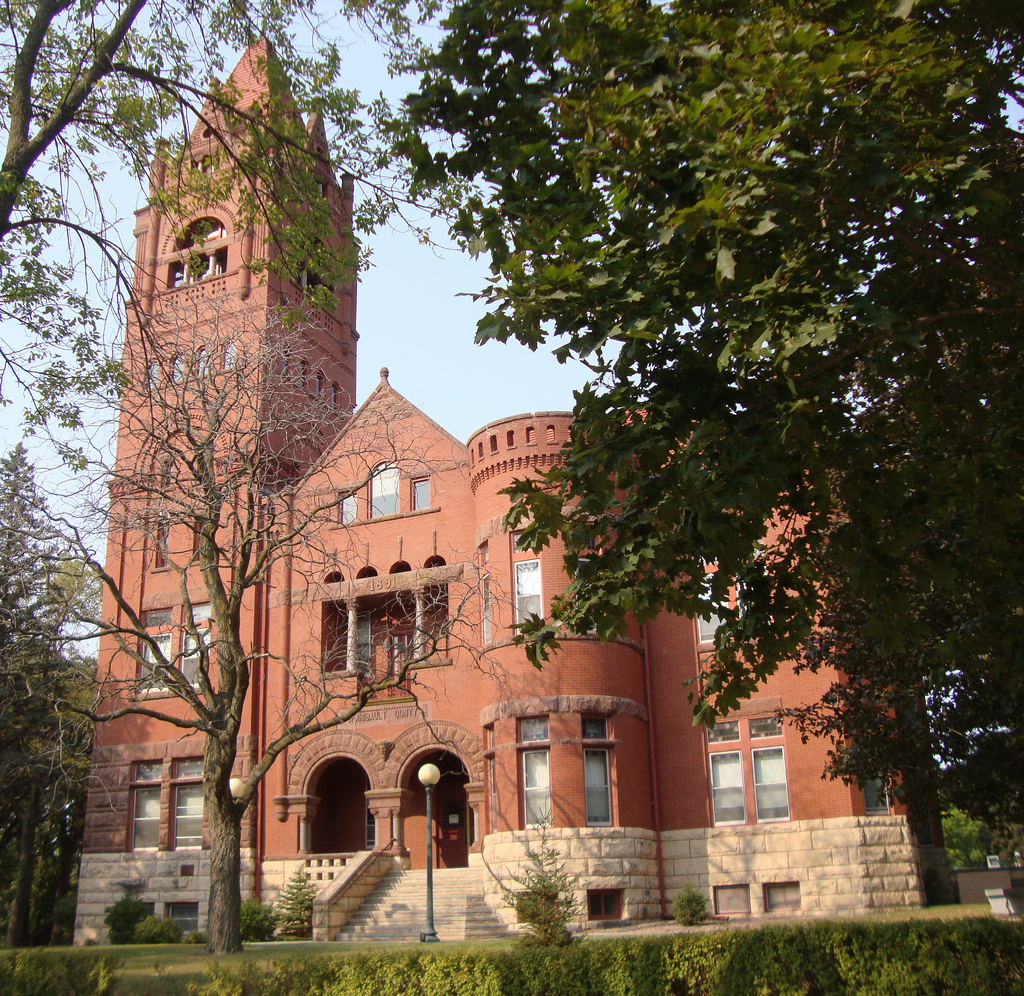