Leland Eugene Boblit, son of Leland F. and Josephine (Coakley) Boblit, was born July 28, 1925 in Great Oak Township, Iowa. He attended country school in Great Oak Township and later at Depew after his family moved. Gene graduated from Cylinder High School. Following graduation Gene was inducted into the United States Army on July 29, 1944 serving in the 182nd Airborne Division as a Paratrooper in France and Belgium. He was honorably discharged on June 30, 1946.

On October 26, 1946 Gene was united in marriage to Rosella Haag in Graettinger, Iowa. Gene and Rosella moved to Minneapolis where they were employed with the telephone company. They later farmed near St. Paul, Minnesota and returned to Iowa in the early 1950s. Gene farmed in the area and was employed by Quaker Oats for twenty years. Gene worked at area elevators since 1954.

After Rosella's death on December 19, 1971 Gene was married to Arlene Hoben on June 2, 1973 in Ruthven. He was a member of Sacred Heart Catholic Church in Ruthven and the Graettinger American Legion. Gene died Sunday, October 29, 2006 near Dickens, Iowa at the age of 81. 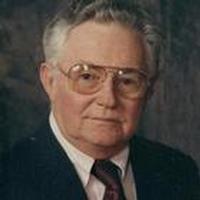