Stephen Leo Carney, son of William and Rose Helen (Ballard) Carney, was born July 7, 1952 in Emmetsburg, Iowa. He received his education at the Emmetsburg Catholic School. Following high school, Steve served in the United States Army from 1969 until 1971 when he was honorably discharged. After returning from service, Steve worked construction in the area. On February 5, 1976, Steve was united in marriage to Diane Schrieber in Emmetsburg. They made their home in Emmetsburg with their children. Steve did interstate trucking for Cornpatch Express, Inc. for nineteen years before his health required him to leave. Steve loved the outdoors, especially coon hunting. He raised and trained coon hounds. He was an avid fan of the History Channel and UFC. Steve was a talented musician, playing his guitar and singing at many events in the area. He performed at the Woodcliff, at several weddings and at church. A highlight in Steve’s life was spending time with his grandchildren. He was very proud of each of them. Steve passed away Monday, September 15, 2014 at the V.A. Hospital in Sioux Falls, South Dakota at the age of 62. 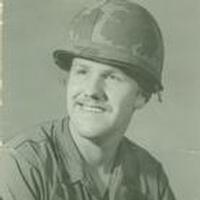