Leonard Leo Julius Bredehoeft, son of Louis and Clara (Driver) Bredehoeft, was born January 29, 1920 in Blackburn, Missouri. He attended Flora Lutheran School and Hickory Grove School. In September 1941, Leonard volunteered to serve his country. He was stationed in the Aleutian Islands and followed in the Pacific Campaign. He later went on to Korea. Leonard was honorably discharged in December 1945 with many army medals and the Purple Heart.

In the spring of 1946 Leonard came to live with his brother Edwin in Emmetsburg where he started farming. On February 1, 1948 he was united in marriage to Normadine Wojahn and they moved to a farm near Depew where they resided for ten years. They then purchased a farm northeast of Ruthven. To this union eleven children were born.
Leonard was a member of St. Paul Lutheran Church serving on several committees. He was a member of the Ruthven American Legion and V.F.W. He served on the Palo Alto F.S.A. and achieved the District of Iowa Soil Conservation Award in 1960. After Leonard retired from farming he sold seed corn and enjoyed gardening. He loved traveling to his see his family and to attend his children's and grandchildren's events. 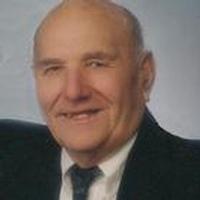