Thomas Richard Barber was born on the family farm in Rodman, Iowa, on February 23rd, 1919. After graduating from Rodman High School in 1937, Rich attended Waldorf Junior College in Forest City, Iowa, where he played baseball, basketball, and football. He taught at Arnolds Park from 1939-1941. He served in the US Army from 1941 through 1945 in the European Theatre of Operations. He attained the rank of 1st Sergeant and was awarded the Bronze Star. For decades after the war, he kept in touch with army buddies by writing letters, notes, and Christmas cards. After returning from the war he taught at Rodman. On June 14, 1950 he and Jeanette Murphy of Emmetsburg, Iowa were married. They made their first home in Iowa City while Rich attended the University of Iowa.

In 1952, Rich and Jeanette moved to Ruthven, where they raised seven children. Rich taught there for 25 years. He coached multiple sports with many successful seasons. When asked by one of his sons about his lifetime record, Rich couldn't say; he didn't keep track of that sort of thing. He was noted as the coach of the Ramettes girls' basketball teams and took two of them to the State Tourney.

During their life in Ruthven, Rich and Jeannette enjoyed significant friendships with other faculty and two generations of students. Rich concluded his career at Emmetsburg, where he began the girls' basketball program. He retired in 1982. Rich and Jeannette loved to dance. In fact, they first met at a dance at one of the clubs up at the Lakes Throughout their married life, they spent many an evening cutting a rug at local dances and sock-hops; a talent admired by his nine eldest granddaughters as they formed lines to be his next dance partner at family celebrations. He took up golf in his late 50's and was, after some time and practice, able to shoot his age well into his 80's.

At the age of 70, after his youngest child Sara graduated from high school, he worked on his game in south Texas. For fifteen winters, he and Jeannette joined many other winter Texans from northwest Iowa in the Rio Grande Valley. On Friday evening November 6, 2009, Rich passed away at the home of his son, Duane Barber. He was surrounded by many of his children and grandchildren. He was ninety years old. 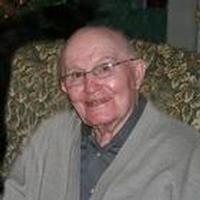