Rodney Wayne Swanson, son of John and Madella (Matthiesen) Swanson, was born October 21, 1926 near Ayrshire, Iowa. He received his education in Ayrshire, graduating from Silver Lake Consolidated High School in 1944. Rodney served in the United States Army and was stationed in Korea for two years. After being honorably discharged in 1948, he returned to farm south of Ayrshire. On February 26, 1949 Rodney was united in marriage to Myrt Friedley at the Little Brown Church in Nashua, Iowa. To this union four children were born. Rodney and Myrt made their home on Twin Oaks Farm, southwest of Ayrshire, where they farmed for many years. Rodney had a cow calf herd during his farming career. Rodney was a member of the United Methodist Church in Ayrshire where he was active on several boards and committees. He was elected to serve on the R.E.C. board in 1979 and was secretary from 1982 until 1986. He was later appointed director of the board. Rodney also served on the Ayrshire Elevator board and was an active member of the American Legion Post #173 in Ayrshire. Rodney retired in 1989 from farming and he and Myrt moved to Spirit Lake where they made their home. During this time they joined Grace United Methodist Church in Spencer. Rodney and Myrt enjoyed traveling, seeing nearly every state in the United States. They often went on the R.E.C. trips and wintered in Florida, Texas, California and Arizona. Rodney was an avid reader and was always aware of current events. While traveling, he was the “navigator”, reading the maps and giving directions while Myrt did the driving. A great highlight for Rodney was spending time with his family. After moving to Spirit Lake, he and Myrt enjoyed going out for breakfast with their friends. Rodney passed away Monday, September 25, 2017 at Avera Hospital in Sioux Falls, South Dakota, at the age of 90. 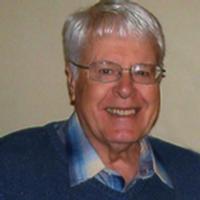